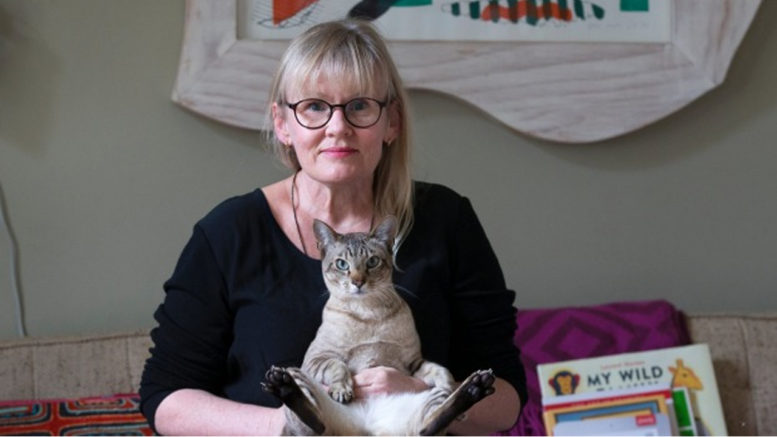 Fairfax media outlet, Stuff, published fake news in January 2017, which led to a stream of anti-Semitic comments on social media. Now, the most recent edition of Fairfax’s Sunday Star Times has chosen to print a vile cartoon suggesting new New Zealand Foreign Minister, Gerry Brownlee, is being controlled by a bloodthirsty Israel. It is worthy of being included in the annual Iranian-sponsored Jew-bashing cartoon contest.

Sharon Murdoch’s work depicts Foreign Minister Brownlee and Israel’s Prime Minister in dialogue against a backdrop of buildings alight with fire. The illustration of Netanyahu and Brownlee looking over the devastation is very similar to an anti-Semitic cartoon that another Fairfax outlet, The Sydney Morning Herald, ran and subsequently apologised for in 2014.

However, it is the dialogue of Murdoch’s cartoon which is more appalling. The two politicians are discussing Brownlee’s statements about Resolution 2334 being “premature” and that McCully is no longer in office. Netanyahu asks Brownlee if he has had McCully killed, to which Brownlee responds “…um…yes…yes, Minister McCully is dead. Or he will be dead, later on this afternoon”. 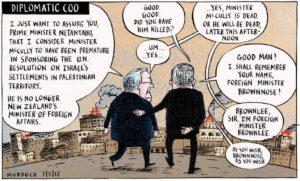 Neither funny, nor clever, the cartoon draws on lowest common denominator stereotypes and anti-Semitic tropes. The schoolboy pun (“Minister Brownnose”) expressing Brownlee’s supposed obsequience to Netanyahu, while pathetic, can be overlooked. However, the grotesque suggestion that Netanyahu would order the killing of a statesman whose policies and actions he disagrees with goes beyond reasonable and responsible boundaries of political satire.

People often roll out the familiar canard that Jews try to suppress free speech and any criticism of Israel by claiming anti-Semitism. Of course it is not anti-Semitic to criticise Israel, its leaders and its policies. But it is undeniable that anti-Semites frequently find form through demonising the world’s one Jewish state, its leaders and its policies, in a way that no other state would be subjected to. Often that demonisation resorts to anti-Semitic tropes and conspiracy theories, including that a shadowy, evil, bloodthirsty cabal of Jews manipulates governments and pulls the strings of world affairs. As noted in an opinion piece in the UK Telegraph:

A conception of the country as an intrinsically malevolent part of a wider Jewish conspiracy is a foundational anti-Semitic trope.”Abi Wilkinson

Just like the fanciful anti-Israel polemic written by the editor of the Dominion Post, another Fairfax outlet, Murdoch’s cartoon in the Sunday Star Times has resorted to simplistic interpretations and failed to engage with the issues, preferring instead to lean on classic anti-Semitism.