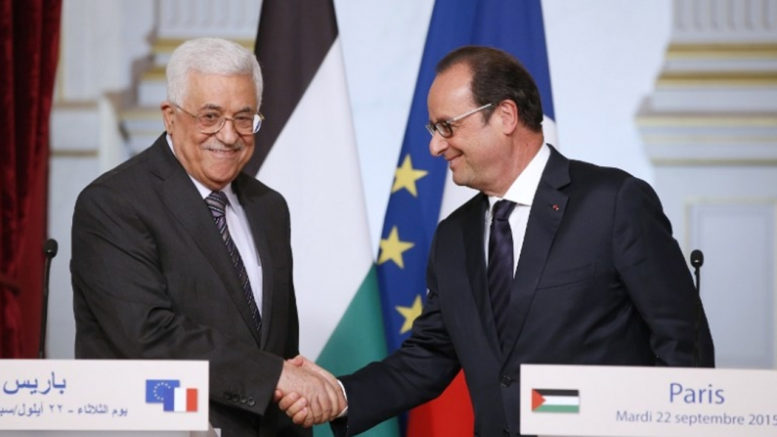 Another spectacle. Another photo-op to say “I care” and to feel like “I’m doing something”. But the cause of peace will be set back. This is what the Paris Middle East Peace Summit is about.

If it were really about peace, the summit would help the Israeli and Palestinian leaders sit and talk so they can reconcile and resolve their differences. It would prepare them for the need to make painful sacrifices, because the prize of peace is worth it.

The French-Palestinian conference in Paris on 15 January 2017 is about to do just the opposite. Instead of urging the Palestinian leadership to return to the negotiating table with Israel it will reinforce that leadership’s serial determination to avoid negotiating at any cost.

Peace between Israelis and Palestinians does not need grand conferences with dozens of participants, replete with empty declarations. To promote peace, the nations of the world need simply to tell Palestinian leaders the truth: that peace requires reconciliation with Israel and the only way to achieve that is through direct negotiations. The ‘International Community’ needs to tell the Palestinians that Israel is a partner for peace and is ready to make painful sacrifices, as indeed it has in the past. World leaders need to tell the Palestinians that they will have to accept difficult compromises with Israel on borders, refugees, security and Jerusalem; to tell them that this is the only way to bring hope and a better future to their children and the generations to come.

The road to peace between Jerusalem and Ramallah passes through just that – Jerusalem and Ramallah. Not New York. Not Paris. Not through international forums, resolutions, or futile conferences. Peace is paved through bilateral negotiations, with leaders meeting face-to-face, ready and willing to work with each other. That was the case with the Israel-Egypt peace in 1979; that was the lesson of the Israel-Jordan peace in 1994. From Northern Ireland to South Sudan, in region after region, direct peace talks alone have brought real solutions.

On the heels of December 2016’s one-sided UNSC Resolution 2334 which, amongst other things, shamefully designates Judaism’s holiest sites in Jerusalem as “occupied Palestinian territory,” the Paris conference is slated to serve as yet another platform for renewed and deliberately selective censure of Israel. It will likely become another international forum that will fail to place the necessary responsibility at the feet of Palestinian leaders.

Israeli Prime Minister Netanyahu has repeatedly entreated Palestinian Authority Chairman Mahmoud Abbas to meet him, yet instead of joining and endorsing those entreaties, the international community prefers to incentivise Abbas’s deliberate avoidance of this direct contact. Indeed, why should Abbas negotiate with Israel when he so effortlessly can have the international community lay the blame on Israel, even as it turns a blind eye to the culture of hate and violence frothing under Abbas’s nose in Palestinian society?

Israel has said yes – and continues to say yes – to any opportunity, any time, any place, to have direct negotiations with the Palestinian leadership without preconditions. But the Palestinians have run away from negotiations time and again, from Camp David in 2000, to Ehud Olmert in 2008, and Paris and Washington in 2014. Through cherry-picking issues in order to appease the Palestinians, the conference in Paris will only entrench this Palestinian intransigence and perpetuate the conflict, thus hurting the Palestinian people rather than helping them.

The Palestinian effort to ‘internationalize the conflict’, enabled by world leaders including New Zealand’s, allows the Palestinian leadership to avoid a final status resolution on these lines. Indeed, this perpetual evasion only proves that the conflict has never been about a Palestinian state. It is – and has always been – about Israel’s right to exist, within any borders. The solution to the conflict requires that the Palestinians be willing to live alongside Israel, rather than seeking to replace it.

If the world’s nations truly seek to advance peace, they should therefore send a clear, unequivocal message to Abbas: Stop encouraging violence and terrorism, stop promoting hate speech, and stop educating Palestinian children to kill Israelis. Teach them that Israel is here to stay, and that peaceful relations with Israel must be the foundation of a future Palestinian state.

While the bloodbath rages in neighboring Syria, world leaders are busy convening yet another display of misguided hubris, that demands nothing from the Palestinians. As such, the Paris conference is a meeting of yesterday. It is anti-Israeli, and anti-Palestinian; it is anti-peace and counter-productive. The international community can – and must – do better.