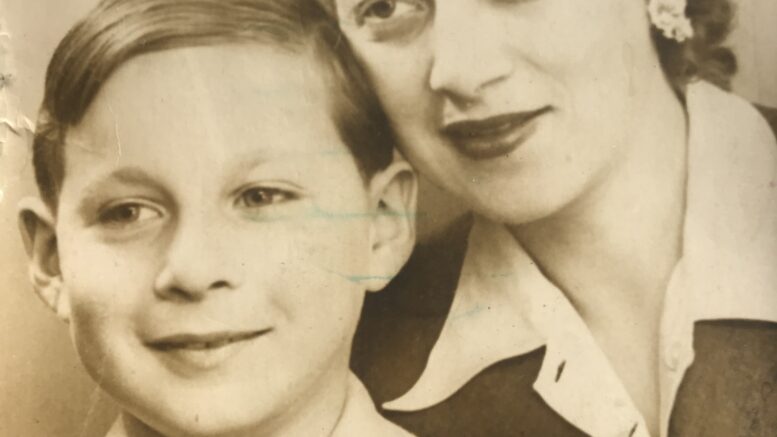 Tonight I am privileged to be allowed to tell the story of a young boy’s survival during the darkest days of the Holocaust, with enormous gratitude to those who risked, and ultimately sacrificed their lives, to ensure he lived. That boy is our father.

On 12 March 1936, our paternal grandparents, Dora and Josef Grynbaum, who owned a tailoring business in Antwerp, Belgium welcomed their little son, Salomon (my Dad) in to the world.

Workshop and home were one and the same for the Grynbaums and so little Salomon grew up under the cutting table to the sound of the sewing machine with customers coming and going. Flemish, Yiddish and Polish were the languages spoken around him. However, the family, for whom Judaism was an important part of daily life, were severely affected and compromised by the German invasion and occupation of Belgium in 1940.

When Dad was just 4 years old he remembers a truckload of German Nazis knocking loudly on the door one morning at 6am. They had come to arrest his dad, Josef, and transport him to the labour camps. Before he went with the Germans, Dad’s father took him by the hand and said “Don’t worry, you and your Mum must go and hide, and I’ll be back soon.” It was the last time Dad ever saw his father. He later learned he had been deported to Auschwitz where he was murdered in July 1943.

Granny Hart, as she was known to us, and her little boy, Salomon, together with his Uncle, were left without money and clothing as they ran from their flat and attempted to flee by car to Switzerland – but the border was already under German surveillance. They reached Paris but with the Germans in control there too they were no better off so they decided to go to Brussels because Jews had been issued with an expulsion order in Antwerp.

One day, whilst walking through the main street of Brussels holding his mother and uncle’s hands, Dad’s uncle told him: “Walk ahead of me now with your mother and, whatever you do, do not look back.” His uncle stepped back and Dad turned around to see him shot by German officers.

Dora knew their lives were in grave danger. With the help of the Jewish Agency, she succeeded in placing Dad in a Jewish orphanage in Brussels, with 50 other children all of whom, except for two, had lost their parents at the hands of the Nazis. The youngest of these was Dad, whose mother went underground and in to hiding, after seeking a safe haven for her son.

The atmosphere at the Brussels Jewish orphanage was friendly – the boys wore kippot and participated in quiet tefillah three times a day. Shabbat was solemnly observed and its commandments kept – all against Nazi orders.

Dad remembers sewing on the yellow star and later changing his name from Salomon to Andre Gautier – a name he had to learn off by heart, in order to conceal his Jewish identity.

The Jewish orphanage functioned as an alibi for the Germans to help pacify the Belgian Royal Family but when the children were registered with the Gestapo, it was deemed no longer safe for them to remain there. Dad had not heard from his mother in four years.

In a night time operation in 1944, the children were smuggled out of the orphanage, put on a train and taken to a large Catholic Church in central Belgium where a priest promised to hide them. As it turned out, they missed the Gestapo officials in Brussels by just two hours.

Dad was hidden for 9 months in the church, and whilst the war escalated, he was permitted by the Priest to practice his religion in secret in the church. This took the form of freedom for the boys to wear kippot, morning and evening tefillah or prayers. The children refused to eat until they were granted permission by the priest to bless their bread before doing so. He also encouraged their Hebrew lessons.

Meanwhile, Dora was living on a drop of soup and occasional bread as a reward for her dressmaking or other tasks. She had taken on the identity of a non-jewish woman who had died, Irene Demaster, and wore a cross around her neck whilst living with Nazi sympathisers.

At the end of the war, out of 50 children hidden at the Church, Dad was the only one reunited with a living parent.

His mother, Dora, emaciated and weighing only 40kg, had tracked down her son. The little boy had not forgotten his mother – ‘Mummy, you came for me.’

The priest later lost his life for hiding Jewish children.

It was three weeks after the liberation that Captain Peter Hart was introduced to Granny Hart; Dora Krasner.  He remembered her as sick, pitiful and emaciated, big eyes, starving.  This was a woman with a horrific story of war, loss and hiding.

They came to England in 1947, Dad was adopted and took the Hart name.  He went to boarding school in Kent. Peter, a non-Jewish captain in the British Army, encouraged Dad’s Judaism. In 1948 the family decided to move as far as possible from Europe and made their way to New Zealand.

Dad has shown us what it is to work hard. To survive. To keep Judaism alive in the face of adversity, hatred, starvation and fear. To pursue freedom and to never look back.