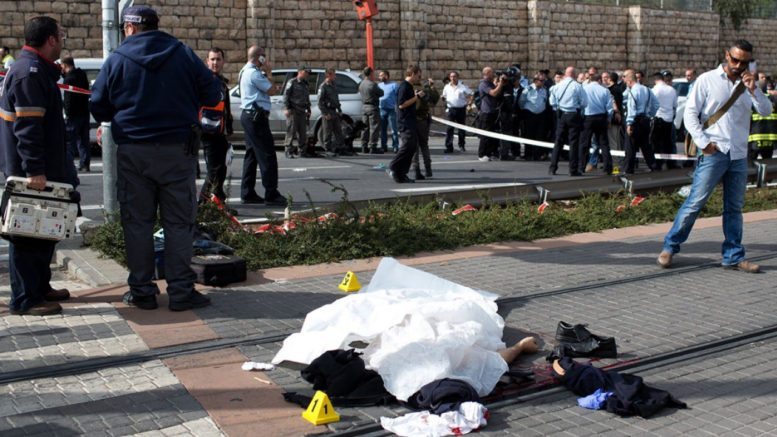 When is the murder of an elderly woman walking along a street justified? The implication of the New Zealand Broadcasting Standards Authority (BSA) 2015-101 ruling is that murder is justified when the scene of the crime in question is labelled ‘occupied’.

On 15 October 2015, a One News report made reference to ‘East Jerusalem’, rather than ‘Occupied East Jerusalem’. This became the subject of a complaint to the BSA by the Wellington Palestine Group, who felt that viewers may be led to believe that the violence was occurring in Israel rather than in ‘occupied territory’.

The BSA upheld the complaint that the item was inaccurate because

East Jerusalem is internationally recognised as being part of Palestine, not Israel, and viewers would have been misled into thinking that much of the violence took place in Israel.”Broadcasting Standards Authority

Whilst the BSA report states that precision is necessary in the use of geographical terms with regard to the Israel/Palestine conflict, they themselves have fallen far short of this standard.

The BSA statement is plainly false and has worrying implications.

Firstly, Palestinians have not yet achieved universal recognition of statehood. New Zealand, along with other democratic governments, has not recognised Palestine as a state. However, the BSA, a Crown entity established under the Broadcasting Act, repeatedly refers to Palestine as if it is a state. The BSA has either not thought carefully enough about the activists’ complaint or is departing from New Zealand’s official  position knowingly.

Finally, as anyone familiar with Israel knows, there is no separate geographical designation of ‘East’ Jerusalem and the absurd attempts to de-judaize the Old City of Jerusalem fly in the face of historical and archeological evidence.

On the surface this may appear a quibble over words in a never-ending conflict, however underlying is a deeply disturbing proposition. It is clear from previous complaints by the WPG that this group believes that framing the violence as ‘resistance against occupation’ makes the violence justifiable and therefore places it in a different category to an ‘uprising against proper authority’.

The BSA, it seems, was persuaded by the argument that viewers might be led to believe that ‘East Jerusalem is a legitimate part of Israel and thus any resistance to the occupation cannot be legitimate’. The acceptance of this argument reveals just how broken is our moral compass with regard to the Palestinian/Israeli conflict.

The One News report referenced the stabbing of a 70 year old women by a Palestinian, one in a wave of attacks on innocent Israeli citizens. These were a direct result of incitement by radical Islamist and terrorist elements, calling on Palestinian youth to murder Jews.

Since 13 September 2015, the Israeli government reports that 34 people have been killed and 452 people (including 4 Palestinians) injured in 148 stabbing attacks, 87 shootings, 43 vehicular (ramming) attacks and a bus bombing. While the Islamic Council of New Zealand has refused to call these attacks terrorism, it is of grave concern that the Broadcasting Standards Authority would use language that also seems to legitimise the murder of civilians.

Any broadcaster or complainant can appeal BSA decisions to the High Court. In this case, it is unlikely that TVNZ will take the matter further but we must ask ourselves some serious questions about the ruling and its implications. How can the killing of innocent civilians, elderly men and women, children and families, ever be considered legitimate? How morally bankrupt must we be in order to deem such conduct acceptable?