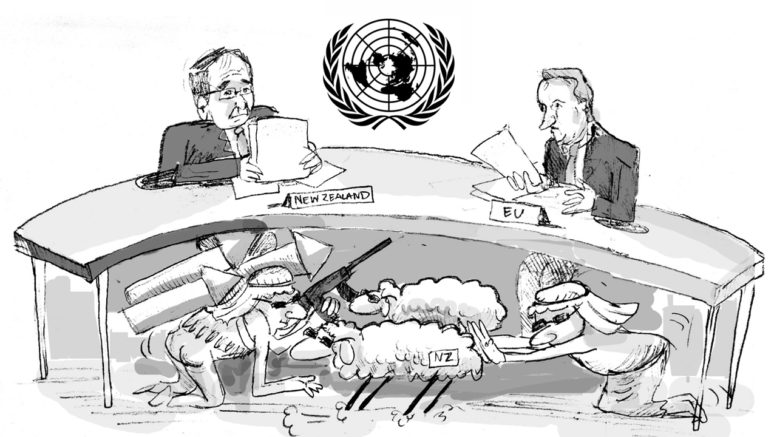 Such was the state of the United Nations, former Israeli Foreign Minister, Abba Eban, once said “If Algeria introduced a resolution declaring that the earth was flat and that Israel had flattened it, it would pass by a vote of 164 to 13 with 26 abstentions.”

The United Nations is still an organisation that treats the Jewish nation differently to all others. Hillel Neuer, Executive Director of UN Watch, describes the UN as a place where

the worst dictators, murderers, and tyrannies of the world, sit and pronounce themselves on human rights, accuse others, and repeatedly, time after time, scapegoat one nation—the State of Israel—as the world’s only criminal on human rights.”Hillel Neuer

At the recent Zionist Federation event in Auckland, New Zealand Foreign Minister, Murray McCully, recognised the bias and said he is critical of one-sided resolutions and politicisation of the UN assemblies:

there is an unhealthy culture that needs to be addressed in the United Nations. There have been countries [that have] made a habit out of bashing Israel at every turn using health resolutions, human rights resolutions, conferences that have got nothing to do with peace and security as a platform to attack Israel and we’ve made it clear that where those gratuitous things occur, we’ll have no part of it…” Minister Murray McCully

Only days after his address, there was a chance to put those words into action. On 24 May 2016, the World Health Organisation Assembly heard a resolution that singled out Israel as the only nation to have violated health rights. True to the words of Abba Eban, the vote passed 107-8 with 8 abstentions. Canada was one of the countries showing leadership in voting against the gratuitous Israel-bashing. Its representative said

Canada once again has concerns about the inclusion of such a political decision in the World Health Assembly – a specialised UN body where there should be no room for politicisation. This decision continues to single out only one side for criticism and calls for the director general to follow a one-sided approach in the mandate that it establishes. This, in our view, is inappropriate…”Canadian representative at the UN

The United States believes that the current draft does not meet our shared objective of a World Health Assembly focussed purely on public health and one that refrains from singling out countries on a political basis. The draft decision before us perpetuates this politicised agenda item in inviting the Director General to prepare a report for the 70th assembly. Like other delegations, the United States shares the objective that this assembly get on with its public health business but we cannot let this decision pass without objection. As it stands, this decision will fall short in its attempt to improve the health of Palestinians…”United States representative at the UN

The other countries to oppose the resolution were Australia, Guatemala, Israel, Micronesia, Papua New Guinea, and Paraguay. European countries voted in favour, with UNWatch describing this as “the old Brussels-Ramallah wink-and-nod game: the PLO submits a more inflammatory text at the beginning, knowing it will be revised later to allow the Europeans to pretend they achieved a “balanced” text. Israel is then expected to celebrate that it has been lynched with a lighter rope.”

New Zealand abstained from the vote, despite Minister McCully’s claim he is critical of “the practice of using [UN] resolutions … to launch one-sided attacks on Israel”. Shalom.Kiwi wrote to Minister McCully asking for an explanation as to why the voting record is inconsistent with the Minister’s statements but at the time of publishing a response had not been received.

This pattern of voting is not new. New Zealand abstained from singling out Israel in biased WHO resolutions in 2015, in 2014, and in 2013. In each of those resolutions, Australia, Canada, and the United States voted against the gratuitous bias and were critical of the abuse of the UN assemblies to scapegoat Israel. New Zealand has failed to show any moral leadership, choosing to be silent at the table rather than speak truth to corrupt powers. Abstaining from a gratuitous Israel-bashing resolution is far from being an “honest broker”. The proper thing to do is to vote against such a resolution.

Perhaps there is a “Wellington-Ramallah nod”, or perhaps New Zealand is too focussed on trading with Saudi Arabia and Iran (part of the Arab League and Organisation of Islamic States blocs, respectively) to worry about such things as fairness or integrity.

Whatever the reason, New Zealand’s actions are those of one complicit in global bullying rather than a leading democratic nation among despots.