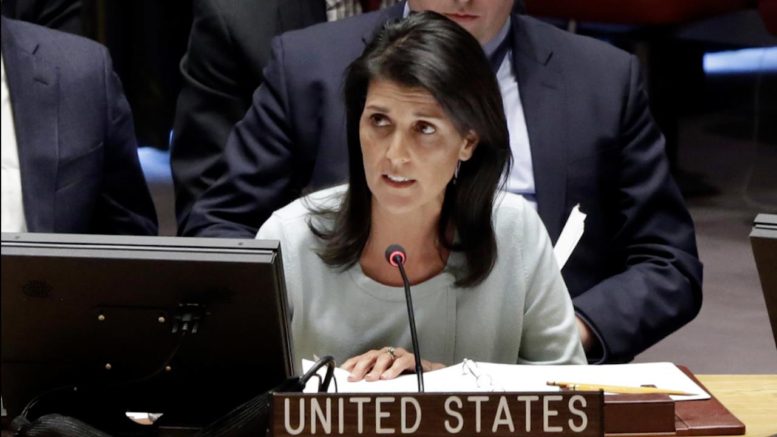 On the occasion of Nikki Haley’s Senate confirmation hearing for the position of US ambassador to the UN last month, UN Watch executive director, Hillel Neuer, wrote “Nikki Haley hit it out of the park today. It’s nice to have a U.S. ambassador who calls out the U.N.’s gross injustices – and cites our UN Watch statistics.”

Haley referred to the 20 resolutions against Israel at the recent General Assembly and only 6 targeting the rest of the world’s countries combined, as well as the 62 resolutions condemning Israeli actions taken to defend its security over the past ten years.

UN Watch reported that “a star is born” in the new US Ambassador at the United Nations, Nikki Haley, after she gave her first press briefing following a regular United Nations Security Council meeting. “The ex-governor of South Carolina…[is] tough as nails but with a smile and a layer of Southern charm”.

Using that charming strength, she stated that,

The prejudiced approach to Israeli-Palestinian issues does the peace process no favors, and it bears no relationship to the reality of the world around us. The double standards are breathtaking…the U.N.’s anti-Israel bias that is long overdue for change. The United States will not hesitate to speak out against these biases in defense of our friend and ally, Israel.”Nikki Haley

Haley has spoken of the “terrible mistake” that was UNSC resolution 2334 and recently affirmed the US position that “We stand for peace. We support a solution to the Israeli-Palestinian conflict that is negotiated directly between the two parties…” She went on to say “The outrageously biased resolutions from the Security Council and the General Assembly only make peace harder to attain by discouraging one of the parties from going to the negotiating table.”

Haley’s speech at her first press conference not only called out the bias at the Security Council and the folly of resolution 2334, but also mentioned the UN Department of Political Affairs having “an entire division devoted to Palestinian affairs” and not a similar division for much more important world issues. “The double standards are breathtaking”, she said. However, before concluding, Haley offered some hope:

Israel’s place in the world is changing. Israel is building up new diplomatic relationships. More and more countries recognize how much Israel contributes to the world. They are recognizing that Israel is a beacon of stability in a troubled region, and that Israel is at the forefront of innovation, entrepreneurship, and technological discovery.Nikki Haley

It’s certainly refreshing to have double standards and anti-Israel bias called out at the UN, particularly the Security Council.