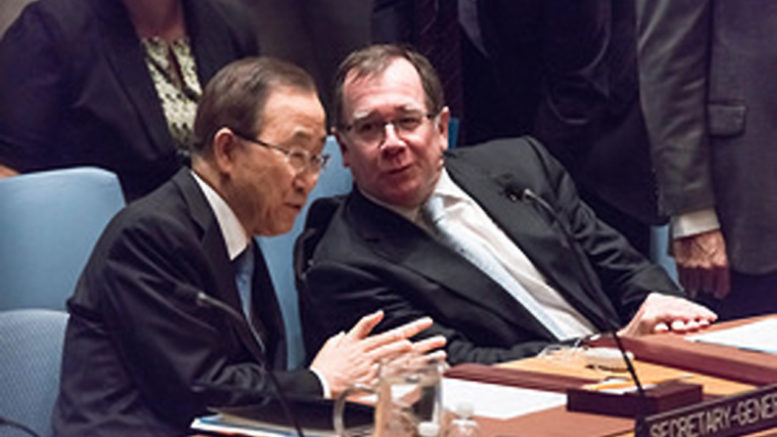 The Secretary General of the United Nations, Ban Ki-moon, has used his final speech at the UN Security Council to admit that the organisation he heads is biased against Israel. He said

Decades of political maneuverings have created a disproportionate volume of resolutions, reports and conferences criticizing Israel. In many cases, rather than helping the Palestinian cause, this reality has hampered the ability of the UN to fulfill its role effectively.”Ban Ki-moon

The Israeli Ambassador to the UN, Danny Danon, reacted to the admission by saying

During this time the UN passed 223 resolutions condemning Israel while only eight resolutions condemning the Syrian regime as it has massacred its citizens over the past six years. This is absurd. With a new secretary-general set to take office next month, we look forward to the possibility of a new era of fairness at the UN.”Danny Danon

Mr Ban seemed to admit something similar in 2011 but the next day, when asked, said “No, I don’t think there is discrimination against Israel at the UN.” This, despite the clear evidence as laid out by UNWatch. The previous Secretary General, Kofi Anan, said, also at one of the last meetings in his leadership role, “On one side, supporters of Israel feel that it is harshly judged by standards that are not applied to its enemies, and too often this is true, particularly in some UN bodies.”

New Zealand Foreign Minister Murray McCully agrees with the Security General that there is bias against Israel at the United Nations. In the same speech where he could not say the ‘T’ word and blamed Israel for the lack of peace, Mr McCully said:

There’s an unhealthy culture that needs to be addressed in the United Nations. There have been countries [that have] made a habit of bagging Israel at every turn – using health resolutions, human rights resolutions, conferences that have nothing to do with peace and security as a platform to attack Israel.”Murray McCully

Unfortunately, neither Mr Ban nor Mr McCully have taken any actions to counter the imbalance. In fact, Mr McCully has consistently blamed Israel alone for a lack of peace and used his seat on the Security Council to draft and circulate a biased resolution on the Arab Palestinian-Israeli conflict. There are also reports that Mr McCully is planning, as one of his final acts, another resolution at the UNSC against Israel.

We can only hope that he heeds the advice of Dr Einat Wilf, who challenged Minister McCully, saying

If New Zealand’s Foreign Minister wants to make an effective contribution, he should address the root cause of the conflict: the persistent Arab-Palestinian denial of the universal right of the Jewish people to self determination in their historic homeland.”Dr Einat Wilf

We can also only hope that a career politician will heed his own words and not perpetuate the clear bias against Israel on the international stage. Only time will tell.