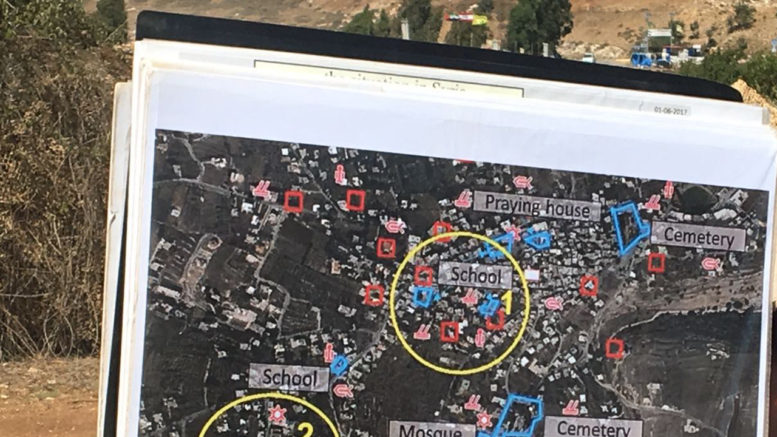 New Zealand shares borders with no nation, let alone one that is hostile or where war is raging. By contrast Israel is surrounded by hostile and warring states, and for Kiwis it is very difficult to understand what that is like, at least without visiting Israel. When I did this year, we were taken close enough to the Northern border to hear explosions and gunfire and watch as smoke rose above the blasts. Our guide – an IDF Major (Res.) – told us the exchanges were between rebel groups and government forces, and that Islamic State was fighting them both just around the corner.

We were watching the Syrian war unfold.

The day before we were briefed on the top of Mt Bental in the Golan Heights, the road we used to get there was closed because mortars had landed on the Israeli side of the border in what the IDF described as ”spillover”. 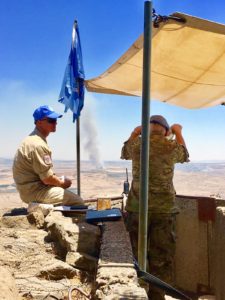 The UN Security Council has recently “strongly condemned” the fighting and UN observers stood next to us with a large telescope, a laptop, and an official flag to monitor how their organisation’s words were being ignored. We all watched the war hoping that nothing ‘spilled over’.

The Syrian war has claimed almost half a million lives and left millions homeless since 2011, yet life in Israel has remained relatively normal. That’s why UN peacekeepers retreated to the Israeli side when the fighting started at the border in 2014.

Expert analyst, Jonathan Spyer, attributes the relative safety in Israel to “a quiet but notable success [of] an Israeli policy [that] avoids taking sides on the larger question of who should govern Syria”. The Israeli government has also strengthened the border infrastructure to ensure the war stays on the Syrian side as much as possible and has largely kept out of the conflict. That is not true for the United States, Jordan, and Russia, who have recently agreed to a ceasefire in the region.

There are three notable caveats to Israeli inaction with respect to the Syrian war – retaliating when Israelis are threatened by “spillover”, providing humanitarian assistance, and working against Iranian actions.

Shalom.Kiwi has previously described some of the humanitarian aid that Israel has given to Syrians in the form of medical assistance, food, and clothing. Recent reports have also suggested that rebels have accepted arms and funding from Israel. This is an interesting development – if true – as victory in the war for these Sunni rebels could easily morph into a regime hostile to Israel.

However, Hezbollah or Assad’s regime – both backed by Iran – are clearly considered a much greater danger to Israel. After all, Iran has publicly and repeatedly called for the destruction of Israel in words and deeds. That’s why Israel, most likely, has attacked Hezbollah weapon convoys. As Spyer explains

Israel does not claim responsibility for attacks on regime, Iranian, or Hezbollah weapons convoys on Syrian soil. But it is likely that Jerusalem has been responsible for a number of attacks of this kind over the last half decade. Such actions are intended to prevent or disrupt the transfer of weapons systems across the border from the regime and Iran to their Hezbollah allies.”Jonathan Spyer

While Israel may have prevented weapons transfers in Syria, our guide told us that Hezbollah is accumulating weapons under houses overlooking the village of Metula – an Israeli town which had to be evacuated during the 2006 war between Israel and Hezbollah – on the border of Lebanon. Metula is about 40km from Mt Bental, where we had just been.

It was there that we saw the warning. 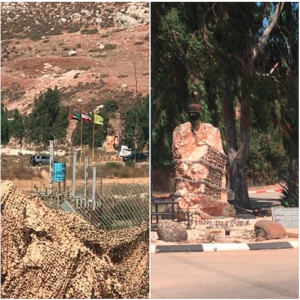 In 1985, just outside of Metula, a convoy of IDF soldiers was attacked by a suicide bomber. Twelve soldiers were killed and 14 injured. A memorial (pictured on the right) was erected in their honour in the village. Just across the fence, Hezbollah have put up a large poster honouring the man who carried out the attack (pictured on the left). It is adorned with the Hezbollah flag – the same one that was flown in London last month – the Syrian flag, and a Palestinian flag.

And only days before we arrived, Hezbollah erected another sign further up the mountain on their side of the fence. The sign depicts the Dome of the Rock and Ayatollah Khomeini with ‘we are coming’ written in Hebrew and Arabic.

And the words are backed by action; one year ago Hezbollah had already stockpiled more than 120,000 missiles under the houses on the mountain overlooking Israel (see header image – each red square is an arms depot). The threat to Israel is now so great that Israel is planning for the evacuation of Israelis and also Lebanese civilians, and the fence that separates Lebanon from Israel is being reinforced to prevent terrorist infiltration and protect Metula and nearby towns.

There is a UN peacekeeping force of almost 11,000 troops in Lebanon, called the United Nations Interim Force in Lebanon (UNIFIL), which has been in place since 1978. Their Force Commander and Mission Head, Major General Michael Berry, recently told Nikki Haley that “The region is calm”, to which the IDF’s Deputy Chief of Staff, Major General Aviv Kochavi, responded “I’m sorry my friend. We think entirely differently…UNIFIL does not enter villages and cities.”. Last month IDF Military Intelligence chief, Maj.-Gen. Herzl Halevi, told a conference that

We are seeing Hezbollah building a domestic military industry on Lebanese soil based on Iranian know-how. Hezbollah is producing weapons systems and transporting them to southern Lebanon.”Maj.-Gen. Herzl Halevi

Even outside the areas where weapons are being stored, UNIFIL has failed to acknowledge Hezbollah has erected observation posts or that there is a mounting risk to Israel. Should Hezbollah decide to attack Israel, our guide told us she would be called up for service and be responsible for making decisions about whether to bomb houses used for storing weapons – even ones near schools and Mosques, as shown in the header image – or to put her family and other Israelis at risk.

It is not possible for the IDF to retreat – like the UN did in Syria – behind another border and watch; they will be forced to take an active part in war with an enemy that clearly does not care about life on either side.

But, for now at least, our guide and the soldiers charged with protecting the small State of Israel must sit and monitor weapons being stored under civilian houses knowing there may come a time when the most difficult of decisions will need to be taken. As Maj.-Gen Halevi also said ”We know what needs to be done… We won’t ignore the establishment of Iranian weapons factories in Lebanon.” We can only hope the United Nations forces in the area will step up to their mission instead of ignoring it.