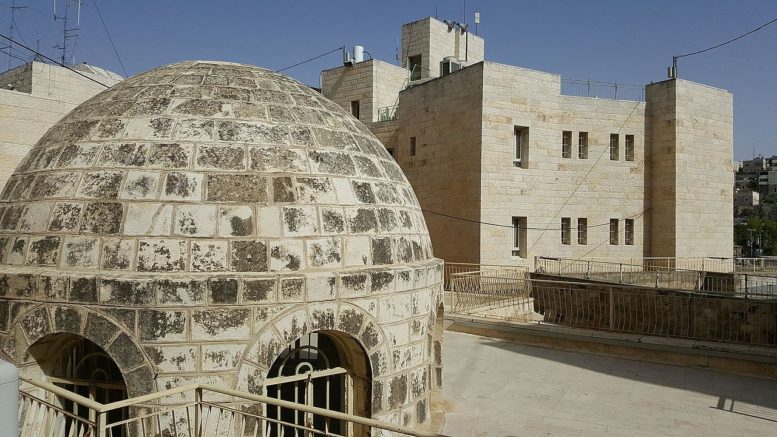 The delegitimisation of Israel and denial of the historical Jewish connection to the Holy Land continues apace with the latest outrageous UNESCO resolution, registering Hebron as a Palestinian heritage site endangered by Israel.

Continuing their historical revisionism and disregard for fact, the UNESCO world heritage committee passed the motion introduced by Lebanon, Kuwait, and Tunisia, 12-3 with 6 abstentions.

This resolution follows another incident in May, when UNESCO’s executive board ratified a contentious 2016 resolution denying any legal or historical Israeli links to Jerusalem, calling Israel an “occupying power” in its capital, and perversely accusing Israel of planting “Jewish fake graves”.

While the Jewish connection to Jerusalem is well known to most – making the UNESCO ruling on that city clearly counterfactual – the story of Hebron is possibly less well-known. Hebron is the second holiest site in Judaism and home to the Cave of the Patriarchs which is revered as the burial place of Abraham and Sarah, Isaac and Rebecca, Jacob and Leah; the mothers and fathers of Judaism.

It is absurd to claim that the site in which Judaism’s patriarchs and matriarchs are believed to be buried is Palestinian, or that it is endangered by Israel.

This is just the latest example of the Palestinian strategy of using lawfare to perpetuate the false and ahistorical narrative that the Jews are not indigenous to the Holy Land and are illegal occupiers.

As the Harvard Law Review noted in June

“[I]n suits and ties we will take the Israelis to The Hague, we will handcuff them. . . . This is a war without bullets.” This assertion — from a confidant of Palestinian Authority (PA) President Mahmoud Abbas, in the wake of United Nations Security Council Resolution 2334— reflects the modern rise of Palestinian lawfare: its strategy of using law “to achieve . . . warfighting objective[s]” against Israel. Having failed over the last half century to shift the balance of power through negotiations and armed resistance, the PA has turned to new battlefronts — including the Security Council and the International Criminal Court (ICC) — where it deploys international law to advance its territorial claims and further Israel’s political isolation.”Harvard Law Review

Hebron has seen intermittent skirmishes between Palestinians and IDF troops in recent years – especially as the Israeli army works to shut down arms manufacturing sites in the city – but the town remains predominantly quiet. However, before the state of Israel was established in 1948, the city was not always as peaceful. In 1929 Arab residents killed 67 Jewish residents and destroyed synagogues and Jewish homes, driving the survivors out of town. Jews only returned to Hebron after the six-day war in 1967, when Israel was able to reclaim the land.

Hebron has a long and rich Jewish history and is the site of the oldest Jewish community in the world. A report by independent conservation experts that came out a week before the UNESCO vote warned that the proposed text “ means that the association of Hebron with Jewish and early Christian societies is given little recognition”. The International Council of Monuments and Sites – advisors to UNESCO – went on to also show how the UNESCO resolution was removing links between Hebron and Judaism, saying

ICOMOS considers that there appears to be the potential for a strong case to be made for considering Hebron as a pilgrimage centre but to support this Tell Rumeida would need to be included and a clearer focus on sites relating to Jewish heritage.”International Council on Monuments and Sites

Yet UNESCO ignored this report and the vote was carried. Of note, five of the 21 voting countries do not have political ties with Israel and only seven of them are rated as ‘Free’ by freedom house. The member states are Angola, Azerbaijan, Burkina Faso, Croatia, Cuba, Finland, Indonesia, Jamaica, Kazakhstan, Kuwait, Lebanon, Peru, Philippines, Poland, Portugal, South Korea, Tanzania, Tunisia, Turkey, Vietnam and Zimbabwe.

UNESCO writes that their “main concern is to foster and maintain intellectual solidarity” but it seems that the real solidarity is less intellectual and more ideological – against Israel and against Jews. As Stephen Daisly wrote “… there was de-Judaization to be done and to an anti-Zionist agency like Unesco, few things are more important than eliminating the Jewish history of the Land of Israel.”

Although an unnamed Arab envoy has reportedly apologised to Israel for their vote, the Palestinian Authority’s foreign ministry welcomed the decision, saying “This vote is a success for the diplomatic battle fought by Palestine on all fronts,” and the Palestinian terror group Hamas, which rules the Gaza Strip, also hailed the decision, calling it an “affirmation of our full rights in Hebron and all Palestinian land.”

The United States was not so welcoming of the decision, with ambassador to the UN, Nikki Haley, saying

The UNESCO vote on Hebron is tragic on several levels. It represents an affront to history…today’s vote does no one any good and causes much harm…It further discredits an already highly questionable UN agency”Nikki Haley

UNWatch wrote that “just as it would be inconceivable for UNESCO to deny the Islamic character of Medina, it is outrageous for the world body to do the same to Judaism’s second holiest site.” In the wake of the resolutions, Israel has redirected $1m from their UN budget toward a museum on Jewish heritage in Hebron.

The Israeli Prime Minister’s office released a statement including

In the face of UNESCO’s denial, the prime minister is determined to present to the whole world the historical truth and the thousands of years of deep Jewish roots in Hebron,”Israeli Prime Minister’s Office

Following the vote, three countries that did not vote on the motion took to the floor to oppose it – the United States, Canada, and Australia. New Zealand was silent and Shalom.Kiwi, at the time of publishing, has had no response from UNESCO NZ to its request for comment.