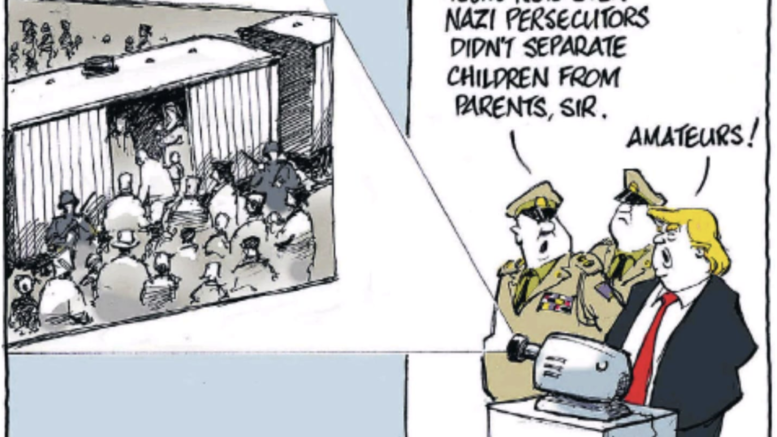 Amongst the recent legitimate outcry about the Trump administration’s policy of separating children from their parents on the southern border of the United States, many commentators around the world have been quick to raise analogies with the treatment of Jews by the Nazis.

In New Zealand, cartoonists and columnists made the same comparison, in several cases revealing a concerning historical ignorance about the unique scale, nature and horror of the Holocaust.

The Otago Daily Times, for example, published this cartoon by Garrick Tremain, which wrongly suggests that the Nazis were more humane than the Trump administration as they did not separate children from their parents. 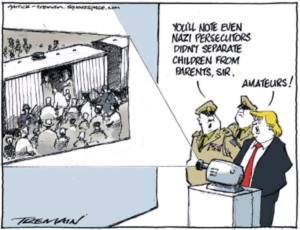 Jewish children were in fact separated from their parents on arrival at the death camps, and sent immediately to their deaths, as the Nazis did not see an economic purpose in keeping them alive. In an effort by desperate parents to save their lives, many Jewish children were taken from their parents, never to see them again, and passed to non-Jews to hide them. Those children who survived suffered lifelong trauma and grief from the separation.

Similarly, in Saturday’s Weekend Herald, columnist Lizzie Marvelly opined:  “I thought back to Nazi Germany this week and felt a chill run down my spine. We often wonder how Hitler came to be able to do the horrific things that he did. Ripping children away from their families and imprisoning them in concentration camps was one of them. Lest we forget what the Anzacs died for…”

Marvelly appears unaware that the Nazis did more than “ripping children away from their families and imprisoning them in concentration camps”.  The Germans and their accomplices murdered approximately 1.5 million children. The murder of all Jewish children was central to the Nazi quest for the destruction of the entire people. Of the small number of traumatised Jewish children who miraculously survived concentration camps, most of those had been subjected to horrific scientific experiments.

In an age when knowledge of the Holocaust is receding, it is alarming that columnists and cartoonists, of whom the public expect certain subject-matter knowledge, are so lacking in basic understanding and that editors would see fit to publish such Holocaust distortion. Other cartoonists, such as Tom Scott in the Dominion Post and  Rod Emmerson in the NZ Herald, have made less egregious factual errors but still relied on an inappropriate Holocaust analogy to convey their point (see cartoons below). 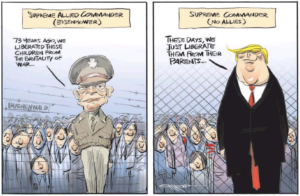 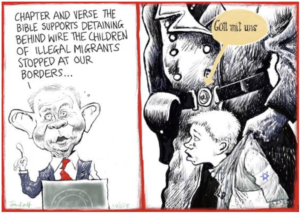 It is possible to criticise the inhumane family separation policy without resorting to glib and historically inaccurate comparisons with the Holocaust. As historian Professor Deborah Lipstadt argues, equating the two is not only historically wrong, but also strategically wrong, as it provides supporters of the policy with a chance to defend their position, and dismiss critiques as hyperbolic. Brendan O’Neil argues similarly, saying the false comparisons reduce the Holocaust to “just one of those things that happens when politicians go overboard with legislation”, denuding it of its uniqueness, and “in doing that… [making] Trump’s own excesses seem almost forgivable in comparison.”

The separation of children from their parents that occurred on the US border is a moral outrage. It is also not, as some claim, the Holocaust all over again. The intention of the Holocaust was the extinguishing of an entire group on an entire continent; as Lipstadt explains, the aim was not separation, but extermination.

It is vital that the memory of what befell the Jewish people between 1939 and 1945 is kept alive – both out of respect for the victims and to ensure that it does not happen again, and we must insist that those who invoke the memory of those murdered, do so with knowledge, good faith and accuracy.