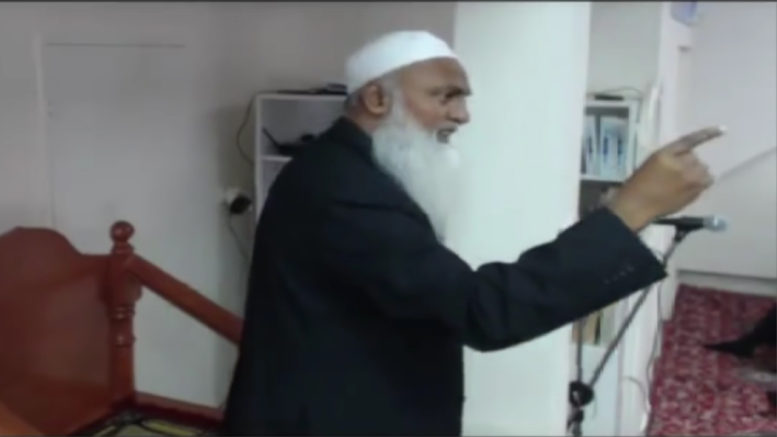 Sheikh Dr Mohammad Anwar Sahib has been widely condemned for his antisemitic and misogynistic comments. He has now been permanently stood down from his role as secretary of the Federation of Islamic Associations of NZ’s religious advisory board and is under investigation by the Human Rights Commission.

However, a number of questions remain. Why was this preacher able to spread his hate speech for so long? Why did it take so long for FIANZ to confirm his role and take decisive action? Why is Sahib still in charge of the At-Taqwa Mosque? Is there cause for ongoing concern?

When the offending video reached the media, the following leaders and groups in New Zealand spoke out:

Notably absent were statements of condemnation of Sahib’s antisemitic and misogynistic comments from the Labour Party and the Greens.

Initially, FIANZ gave a radio interview during which President Hazim Arafeh said that “the honourable minister [Lotu-liga] made a mistake”. He then proceeded to evade the hard questions. Soon after, FIANZ released a statement which did not address the comments or even name the Sheikh. Later that day, Sheikh Dr Sahib demanded an apology and said he had been misunderstood and that his words had been taken out of context. Today, FIANZ took the step of dismissing the religious leader from the organisation over the comments.

This step has been well received by Minister Lotu-Iiga. The New Zealand Jewish Council has also praised the move, saying:

After widespread condemnation of his remarks, the New Zealand Jewish Council is pleased that FIANZ has ceased Sheikh Sahib’s employment and stripped him of his FIANZ leadership role.

We remain concerned that he will continue to preach and influence congregants at the At-Taqwa Mosque.

The Jewish Council thanks the many Kiwis and leaders who have expressed outrage and offered support.”Dr David Cumin, New Zealand Jewish Council

While the video incident seems to have reached a just conclusion, it remains somewhat of a mystery to the average New Zealander just who this man is and what he represents. Is his influence over people good for our society and how many similar preachers are there in New Zealand?

In 2001, the Centre for Islamic Pluralism published an article that described Sheik Dr Anwar Sahib as a high-ranking Islamic cleric trained in and funded by Saudi Arabia. A Fiji Indian, he spent 15 years being trained as a cleric by the Saudis and was described as an ultra-conservative fundamentalist. The Wahhabi sect to which Sheik Dr Anwar Sahib belongs is described as adhering to the most extreme form of Islamic fundamentalism. The author of Intellectuals and Assassins, Stephen Schwartz, said of Wahhabism that “it is violent, it is intolerant and it is fanatical beyond belief.”

Sheik Dr Anwar Sahib came to New Zealand on a Saudi-funded scholarship and was exposed as having ties to Osama bin Ladin. The then president of FIANZ, Dr Anwar Ghani, dismissed the concerns, saying he knew of no terrorist fundraising or terrorism-linked activity among local Muslims.

In 2011, FIANZ president, Anwar Ghani, once again dismissed concerns when he met with officials of the New Zealand Security Intelligence Service (SIS). The SIS was concerned about reports that at-Taqwa mosque youth were talking about preparing for jihad in New Zealand. Sheikh Dr Sahib continued during this time to be a senior member of FIANZ.

In 2013, there was a report that Sheikh Dr Sahib had been involved in an Islamic conference where other invited speakers also gave antisemitic, misogynistic, and homophobic sermons. And, more recently, in January 2016, the WhaleOil blog revealed that one of the congregants of at-Taqwa mosque, where Sheikh Dr Sahib preaches, has potentially been radicalised and is a known Islamic State supporter. One is left wondering whether radicalisation of Muslim youth is happening in New Zealand mosques.

As Sheikh Dr Sahib is a New Zealand citizen, it is unlikely that he will be forced to leave the country. Therefore, like another radical Auckland imam, Sheikh Abu Abdullah, Anwar Sahib will likely continue to preach fringe views in New Zealand, particularly as he is still the leader of his mosque, has access to congregants, and can still broadcast sermons (which he considers to be acceptable) on the Internet.

While most Kiwi Muslims are clearly peaceful, law-abiding citizens, and many Islamic organisations quickly distanced themselves from the sermons, Kiwi members of civic society who cherish peace are right to be concerned about any rise of Islamic fundamentalism that might threaten the New Zealand way of life.

A glance over the ditch to our Australian neighbours may be instructive, as they have been dealing with these issues over a longer period. Australia has, unfortunately, seen the ugly fruit of radicalisation in its midst and is now grappling with the difficult question of how to contain local terrorist activity.

Thankfully, New Zealand has not yet had to face the horrors of Islamist terrorism.

As citizens, we rely on our government to root out radicalisation and Islamic fundamentalism that is already here, and to prevent any more from coming into New Zealand. To ensure that New Zealand remains safe and secure for all its citizens, the government must adopt a policy of zero tolerance for radicalisation and then ensure that the appropriate legislative powers are in place to enable the government to enforce it.

h J R
Shalom.Kiwi @ShalomKiwi @chloetsila: There has been a serious finding in the #SarahHalimi parliamentary commission. The French police could have prevented her murder. But didn’t. Thread: 1/10

h J R
Shalom.Kiwi @ShalomKiwi @PinskerCentre: Tonight, students at Essex University chanted for the destruction of Israel. They were protesting a talk by @COLRICHARDKEMP about Afghanistan. In 2019, Essex students voted against the creation of a Jewish society. It seems now they also want to destroy the Jewish state. https://t.co/m4iroUrkQe

h J R
Shalom.Kiwi @ShalomKiwi @JulietMosesNZ: The ingathering of exiles: these are my favourite stories about Israel, that remind us why we have it and fight for it. Hailing from northeast India, 235 descendants of the lost biblical tribe of Menashe have returned home after 27 centuries of exile. https://t.co/OPEZRF0F47